Follow us
Search
Create
Menu
Follow us
Search
On Friday 23rd Mary 2018, over 40 of the 149 Nigerians deported from Libya came to The Synagogue, Church Of All Nations (SCOAN) in Lagos, Nigeria where they received the sum of N2.5m ($7,000) from Prophet T.B. Joshua.

One of them recounted his tortuous experiences while in Libya, which were then published on T.B. Joshua’s official Facebook page:

No one should have to see what Onyema Igwe saw. A scene forever emblazoned in his conscience. The height of human cruelty unfolding before his naked eyes. An unwilling accomplice to a heinous crime.

Almost 30 of them had embarked on the treacherous trail. The journey began in Kano State, Nigeria where the group were roughly transported at night to Agadez, Niger – regrettably renowned as the smuggling capital of Africa. Onyema, a spare-parts dealer from Imo State, spent his life-savings to fund a journey “to a better life” abroad. That fantasy was soon to be dealt a heavy blow. 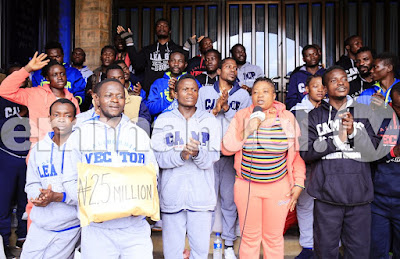 Bundled “like sardines” into the back of a pick-up truck, Onyema held tightly onto a wooden pole fixed to the truck – the only item that stood between him and falling to certain death in the infamous Sahara Desert. “If you fall, no one will come back for you,” the smuggler bluntly explained. Corpses littered the ground as the vehicle sped into the horizon, a somber sign of untold dangers lying ahead.

The driver suddenly ground to a halt at the outline of a stationary vehicle. Squinting through the sandy haze, the sight that met Onyema was brutally heartbreaking. 30 bodies strewn in the back of the vehicle. Men. Women. Children. Gone. “The vehicle had a fault,” the driver muttered. “Once you run out of water, you can’t survive more than three days out here.” A foul stench pervaded the atmosphere. The odour of death and decay.

Hastening their speed, the journey continued. Until tragedy struck in the most wretched of manners. Onyema knew one of the female travelers was pregnant – it was obvious to see – but no one knew the combination of heat and exhaustion would trigger premature labour. In the midst of the Sahara Desert, hurtling at breakneck speeds across dunes in an overcrowded vehicle, her screams pierced the night. She delivered a baby that day… but lost her own life. The stress and trauma were too much for her frail body to bear.

Their ‘guide’ was furious. “How could they allow such a lady on this trip,” he fumed as another ‘passenger’ cradled the newly born in her arms. The gift of life mired by the snare of death. The trafficker rudely ordered the men out of the vehicle. “Dig a grave in the sand,” he bellowed. Onyema joined the others. Rudely kicking the corpse of the deceased into the crudely created hole, no one could be prepared for the instruction that followed. “Throw the baby in as well!” Shock-tingled silence. No muscle moved. No eyelid bat. “I said, throw it!”

“The cries of that baby still wake me up at night,” Onyema soberly recounted. “I was among those forced to use sand to cover the baby and her mother in that shallow grave.” He finally reached Libya but never made it across the Mediterranean Ocean to Italy. “I was sold into slavery in Libya,” he narrated. Forced to do work “meant for machines”. Beaten. Tortured. Starved. Is this what he sold his life-savings for?

Languishing in a Libyan prison, Onyema was finally among those discovered by the International Organisation for Migration (IOM) and deported back to Nigeria. His first point of call was The Synagogue, Church Of All Nations (SCOAN), alongside over 40 Nigerians repatriated from Libyan cells. On Friday 23rd March 2018, Prophet T.B. Joshua gave the group the sum of N2.5m ($7,000) to start their lives afresh back home.